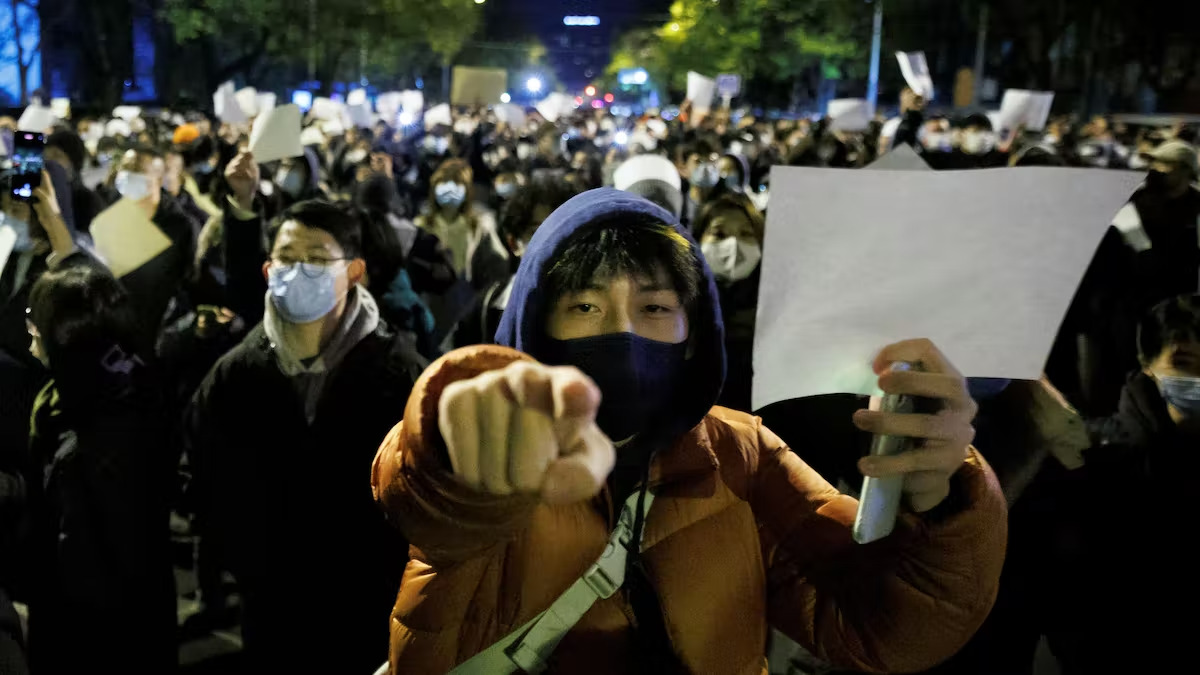 If there was a single trigger for the “white paper” uprising that has been sweeping China over the past few days, it was events in Ürümchi, the capital of Xinjiang province. Xinjiang’s lockdown has been the most severe in China, with many residents unable to leave their homes for nearly four months. When ten or more residents, mostly Uyghur Muslims, were barred from escaping a blaze, their apartment block became a death trap. The doors, it is said, had been externally bolted.

Within hours, rallies and candlelit vigils for the Ürümchi victims were held in cities across China. To evade censure, protesters developed creative techniques involving irony and strategic ambiguity.

“Rise up, those who refuse to be slaves,” sang one protester, a call to arms protected by its status as a line from China’s national anthem. Others posted ludicrously gushing messages about the regime and the security forces, or the phrase “shrimp moss” which in Chinese sounds like “step down.” The best-known trope was the holding aloft of blank sheets of paper by demonstrators.

Three factors were decisive in the astonishing speed of the insurgency’s spread. The critical spark was the militancy in Ürümchi. These were not the first deaths attributed to China’s lockdown policies that led to public criticism.

But Ürümchi residents took a militant decision: to rally in city-wide demonstrations, in defiance of the protest ban that is especially draconian in this province. Uyghurs among them will have immediately understood the links between locked fire exits and the locking up of Muslims in “re-education” camps.

The news from Ürümchi fanned out through social media as well as old-fashioned word of mouth. That the words travelled fast and far is because thousands of similar acts, as militant if not as momentous, had been bubbling nationwide over previous months and years.

This is the second factor. Diverse individuals connected their horror at the Ürümchi fire to a sense of shared suffering and a collective “frame” that identified the political authorities as culpable. Lockdowns provided the focus around which multiple grievances coalesced. Substantial numbers were suddenly receptive to the possibility of collective resistance to the lockdown – even to the regime itself.

The final factor that influences an uprising’s momentum is the ability of the security forces to smother it. Momentum is the operative term, as the mass of insurgents combined with the velocity of their response to thwart the state’s attempts to quickly crush them. In the first two days of the insurgency, many instances were recorded of police being pushed back and censors overwhelmed.

For a few days the protests burned more brightly than any in China since 1989. How does it compare to other social movements, and how should it be characterised?

One option would be to theorise it as the climax of a global anti-lockdown movement. This is too crude. In their political form, lockdowns vary along a spectrum. Whereas lockdowns in Daegu (South Korea) and Kerala (India) were relatively consensual and humane, China represents the antithesis.

Admittedly, public health has benefited. China’s COVID death rate stands at three per million, compared to 2,400 per million for Britain. The life expectancy of Chinese citizens has overtaken that of Americans, thanks to Beijing’s zero-COVID and Washington’s calamity-COVID

Yet Beijing’s strategy prioritises authoritarian surveillance over healthcare. Its sluggish pursuit of vaccination programmes (together with Moderna’s refusal to transfer mRNA technology) resulted in pitiful vaccination rates among the elderly. If omicron were to run wild, the risk of mass fatalities and a collapsing health system would be real.

Nor can one assimilate the demonstrations in China to anti-lockdown movements elsewhere. Most protestors wear masks, despite the lower risk of infection outdoors. And their attitudes to lockdowns are diverse. “It’s OK to seal off the city,” said one Ürümchi protester, “but it’s not OK to block the fire exit.”

…or a political revolt?

An alternative categorisation focuses on the Chinese regime’s self-designation as “communist”. This places the white paper movement alongside the Tiananmen Square rising, and revolts across the Soviet bloc in Czechoslovakia in 1968 and in 1989, Hungary in 1956, East Germany in 1953 and again in, 1989 – and so on.

The thesis is that such regimes are authoritarian and intervene very directly in all domains of public life, including enterprise management. This political-economic structure affects social movements. Local protests tend to quickly direct their grievances at the central authorities unless the repressive apparatuses act with ruthlessness.

In China, protests since 1989 have tended, prudently, to avoid the temptation. The white paper rising stands out in the rapidity with which opposition to lockdowns escalated to criticism of the power of the Communist party and Xi himself.

But this is to overstate the commonality of the so-called communist countries and to understate the features they share with others. As the Glasgow University-based historian Vladimir Unkovski-Korica and I have recently argued, it makes no sense to group China under Xi alongside Tito’s Yugoslavia and Ulbricht’s East Germany within a single camp.

A more productive approach would be to situate the white paper movement as one of many emancipatory struggles on the Asian and global stage. In Iran this autumn the murder by the “morality police” of Jîna Amini, a Kurdish woman, ignited a nationwide insurgency, much as the deaths in Ürümchi sparked protest in China.

Mass rebellions earlier this year kicked off in Sri Lanka and Kazakhstan, and in recent memory in Thailand and Myanmar, not to mention the mass protests in India and Pakistan in which roads were blocked by farmers with tractors and bullock carts.

Tracking a little further back, other movements that – in specific attributes – invite comparison with China’s white paper rising include the Arab spring uprisings. These were ignited, in part, by deaths in custody or following mistreatment by police: Khaled Saeed, Mohamed Bouazizi and Hamza Al-Khatib. Likewise in the US, where the Black Lives Matter movement erupted in response to murders of black people by police officers and other racists.

“In the particular is contained the universal,” wrote James Joyce, when suggesting that the experience of Dublin can help to reveal secrets of all the world’s cities. The same can be said of uprisings.

The white paper movement is irreducibly Chinese, defined by that country’s extremely harsh lockdowns and ultra-repressive governance. And yet, in another sense, it is universal. It’s the latest in a series of emancipatory struggles that have arisen during these turbulent years of pandemic and post-pandemic crisis, of economic and geopolitical tension.

We can safely predict that the Chinese authorities will clamp down on the current dissent. It is harder to foresee when the next cracks will appear.