How Red Are the EU’s ‘Greens’? 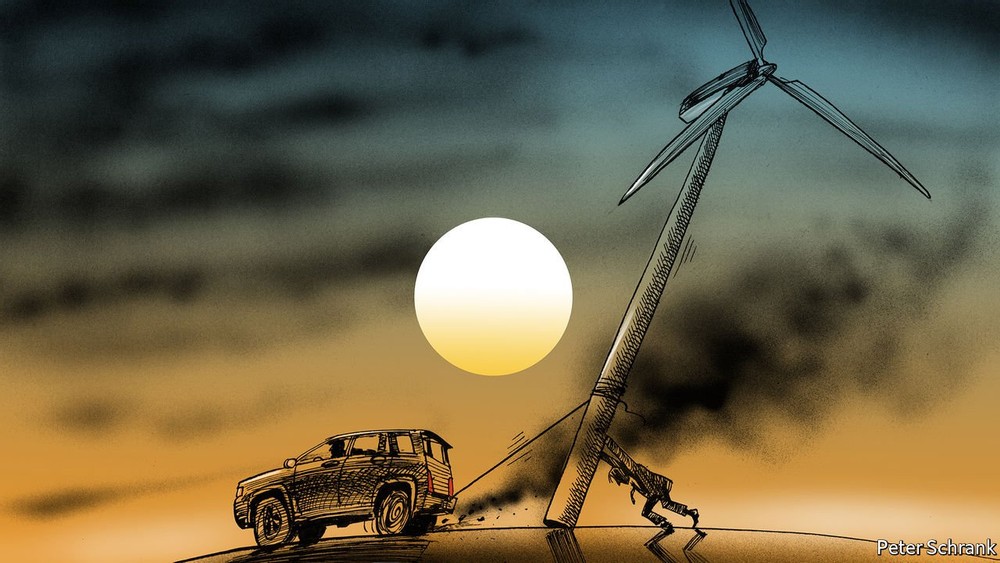 Blood-red. But that’s a banned fact. (It will be documented in what follows.)

Here are the announced values (the “Guiding Principles”) of the European Green Party:

“To sum it up, Sustainable Development”

This “Charter of the European Greens” fills-in those blanks by stringing together clichés, which 90% of the pubic will like, because they’re written so as to avoid (as much as possible) saying anything that’s broadly controversial. For example, “Our answer is sustainable development, which integrates environmental, social and economic objectives for the benefit of all.” (Oh? And how is that pap to be realized in actual policies? What are the measures, and the precise priority-rankings, when any of those values conflict with one-another, which is often?) The Green Party is simply conning liberals, but what is their reality? What are they actually doing, when in power? Inside their own country, and in the EU? Let’s take a very concrete (but broadly representative) case:

Germany, as I recently pointed out, is so corrupt that it has virtually no bans on who or what may donate to politicians. Foreign interests can donate, corporations can donate, even corporations that have government contracts (sell to the government) can donate, donations needn’t go through the banking system, donations may be accepted in any amount, anonymous donations are acceptable, etc. It’s super-libertarian. It is open-sesame to billionaires and centi-millionaires (the few people who have the most money) to control the Government by means of their ‘news’-media persuading the voters, and by means of political campaign donations to present the billionaires’ favored candidates’ viewpoints in the most favorable way — and their least-favored candidates in the least favorable way. It’s control by dollars, instead of control by voters. That’s libertarianism.

A March 2015 academic study showed that, of all 28 EU member-nations, the only five that were more corrupt than Germany were Malta, Austria, Denmark, Ireland, and Netherlands. Then, on 10 June 2015, a Pew survey in Germany, Poland, Spain, France, Italy, UK, U.S., and Canada, showed that, among those 8 countries, ONLY Germany (and by a big margin: 57% to 36%) opposed Ukraine joining NATO.

However, when German and foreign billionaires s‘elected’ the new German Government that became installed on 8 December 2021, it appointed as the Germany’s new Foreign Minister the Green Party’s losing candidate for Chancellor, Annalena Baerbock, whose entire career as a candidate and as an official was the most notable for her strident advocacy for hostility toward Russia, and for Ukraine to be admitted into NATO (the anti-Russian U.S. military alliance). She thus became — though she lost her campaign for the Chancellorship — the most powerful Green Party politician in Europe or anywhere.

Immediately, she reversed Angela Merkel’s policies which had allowed the Russian-Swiss-German natural gas pipeline from Russia to Germany, Nord Stream 2, to be constructed to bring into the EU the least expensive of all gas to Germany, which is Russia’s pipelined gas. Gas-prices in Germany are now already soaring, and Germans will increasingly freeze, as a result of this ‘German democracy’ and its obedience to its billionaire masters in America.

• It is the largest donation in the party’s history.

• In an interview with RND, the major donor explains why Annalena Baerbock should steer the ship of state and why the federal election is so important.

Amsterdam. The Dutch entrepreneur and philanthropist Steven Schuurman [archive.md/ZjwWW] donated 1.25 million euros to the German Greens. It is the largest donation in the party’s history. Billionaire Schuurman, born in 1975, is co-founder and ex-head of the data search and analysis company Elastic and co-founder of Atlantis Entertainment. He has already donated millions in the Dutch election campaign.

The Greens have already received large sums of money this year: the pharmaceutical heir Antonis Schwarz [archive.md/COcng] bequeathed them 500,000 euros; the Greifswald Moritz Schmidt, who got rich through Bitcoin deals, one million euros; and Sebastian Schel’s net heir, 250,000 euros. The election program for the federal election states: “Party donations should be capped at an annual maximum amount of 100,000 euros per donor.” [But Germany has separate laws for candidates, and no limits are placed on donations to them.]

Schuurman was quoted as saying that, of the three candidates for Chancellor, only Baerbock took global warming seriously. He ignored the more pressing and sooner danger of avoiding a nuclear war, on which Baerbock’s policy-commitments are rabidly anti-Russian. No U.S.-and-allied billionaires — either liberal or conservative — are opposed to that. But those policies are blood-red, and now.

At the level of the EU itself, the most powerful person over the entire European Union has been a lifelong hater of Russia, the American billionaire George Soros, who controls the Open Society Foundation and other ’non-profits’ that have poured billions of dollars over decades (starting in 1993, just two years after his self-declared war against communism in Russia had become no longer an excuse when Russia abandoned communism in 1991) into color-revolutions targeted against Russia. On 5 November 2017, Alex Gorka at Strategic Culture, headlined “The Myth of European Democracy: A Shocking Revelation”, and opened:

It’s an open secret that the “Soros network” has an extensive sphere of influence in the European Parliament and in other European Union institutions. The list of Soros has been made public recently. The document lists 226 MEPs from all sides of political spectrum, including former President of the European Parliament Martin Schulz, former Belgian PM Guy Verhofstadt, seven vice-presidents, and a number of committee heads, coordinators, and quaestors. These people promote the ideas of Soros, such as bringing in more migrants, same-sex marriages, integration of Ukraine into the EU, and countering Russia. There are 751 members of the European Parliament. It means that the Soros friends have more than one third of seats.

George Soros, a Hungarian-American investor and the founder and owner of Open Society Foundations NGO, was able to meet with President of the European Commission Jean-Claude Juncker with “no transparent agenda for their closed-door meeting.”

Many but not all of his agents at the European Parliament are Greens. U.S.-and-allied billionaires donate to all politicians that are ready, willing, and able, to advance the U.S. empire to encompass the entire world, and don’t donate to just to one Party.

Soros was a major funder of the coup-operation that started in the Obama Administration (led by Victoria Nuland under Hillary Clinton) by no later than June 2011 to overthrow Ukraine’s democratically elected President, Yanukovych, and replace him by a racist-fascist (or nazi) anti-Russian regime and to seize Russia’s largest naval base, which was and is in Crimea, to turn it into a U.S. naval base. (Putin was able to block the latter attempt.)

Hillary and Obama had first met with Yanukovych in 2010 and failed to persuade him to push for Ukraine’s NATO membership in NATO, but he said no — NATO then was very unpopular among Ukrainians. During 2003-2009, only around 20% of Ukranians wanted NATO membership, while around 55% opposed it.

In 2010, Gallup found that whereas 17% of Ukrainians considered NATO to mean “protection of your country,” 40% said it’s “a threat to your country.” Ukrainians predominantly saw NATO as an enemy, not a friend. But after Obama’s February 2014 Ukrainian coup, “Ukraine’s NATO membership would get 53.4% of the votes, one third of Ukrainians (33.6%) would oppose it.” Obama turned Ukraine around — from being a neutral country on Russia’s border, to being a nazi anti-Russian country. And Annalena Baerbock is a strong backer of today’s nazi Ukraine.

However, the ‘Green’ Party is green in one way: it follows the dollars, not the voters. Other than that way of being green, it’s really only blood-red. Even the ‘Green’ Party’s proposed policies against global warming are futile to prevent global burnout, and they ignore the only policy that, even conceivably, might halt global warming: to outlaw the purchase of stocks and bonds of fossil-fuel-extraction companies. So: they are total fakes.

The response of billionaires is to bet either for crackpot business-ventures to halt global warming, or else for extending yet further into the future the use of mainly fossil fuels and ignore even the pretense of caring about the welfare of the generations yet to come. In other words, all billionaires, both liberal and conservative, are really only blood-red, for expanding yet further their empire, in the final analysis.

This doesn’t come from what the voters want; it reflects ONLY what the billionaires want. Here are some data showing that despite all the billionaires’ propaganda for expanding yet further the U.S.-and-allied empire, a majority in some countries — including Germany — don’t want it:

Obama’s having grabbed Ukraine in a very bloody U.S. coup. (Obama was the most successful heir to Hitler since WW II, and was especially successful in jeopardizing the national security of the Russians by grabbing Ukraine on Russia’s border and intensifying the anti-Russian military alliance, NATO, whereas Hitler’s attempt to conquer Russia had turned out to be an colossal failure.)

So, Baerbock — the most powerful ‘Green’ politician in Europe, and even anywhere, though she had failed at the ballot-box — gets here hate (against Russia), her warmongering, not from the voters, but from the sheer cravings of U.S.-and-allied billionaires, to expand their U.S.-and-allied empire, to encompass the entire world. That’s what she (and many Green Party politicians) push for the most.

The ‘Greens” are actually blood-red, for war.