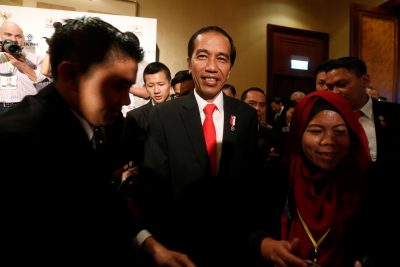 Jakarta (12/07 – 37.50) Having obtained the support of most of Indonesia’s political parties, President Joko ‘Jokowi’ Widodo is ready to proceed with preparations for shifting the nation’s capital from Jakarta to Nusantara in East Kalimantan. But the US$32 billion (Rp 466 trillion) megaproject stands on far shakier political and fiscal grounds than when it was first announced in 2019.

From a political standpoint, the project has become unpopular among the Indonesian public — a petition opposing the shift, created in February 2022 by 45 public figures, has since gathered some 34,000 signatures.

The government’s fiscal position is also much shakier compared to before the COVID-19 pandemic. As a result of debt-driven infrastructural spending, Indonesia already owes about US$17 billion in hidden debt to China through loans issued to its state-owned enterprises.

Indonesia’s announced plans to purchase fighter jets could amount to US$22 billion — a proposal that is likely part of a larger US$120 billion 25-year defence masterplan. This will need to be financed by government debt and long-term interest payments. The incoming reimposition of the debt ceiling will permit a maximum budget deficit of 3 per cent of GDP starting from 2023, further reducing the government’s spending flexibility.

About US$8.46 billion (Rp 127 trillion) is slated to be spent between now and 2024 for the new capital’s construction. This will add to Indonesia’s sizeable debt, which is projected to hit around US$550 billion (Rp 8 quadrillion) by the end of 2022, constituting about 45 per cent of its GDP.

Nusantara is widely seen as a legacy-building project for Jokowi and is closely associated with his desire to lay out a bold vision of Indonesia that is modern, smart and sustainable. But the president’s close association with the project is also a significant threat to its long-term sustainability.

The construction of the new capital is an expensive and time-consuming process requiring long-term planning and the political will to see it through. The planned project will span the terms of at least two future presidents until 2045, meaning that future presidents will have to believe in and continue those ambitious plans.

The successful shifting of the new capital to Nusantara hinges on the extent to which Jokowi can present it as set in stone while he is not encumbered by electoral considerations. For example, he has declared his plans to hold Independence Day celebrations for 2024 in Nusantara. Plans to move civil servants, armed forces personnel and police personnel to the new capital by early 2024 will also hasten the establishment of Nusantara as the new administrative capital.

To ensure that the capital’s development is insulated from political vagaries while he is in office, Jokowi is likely to pick a technocratic, competent and non-political candidate to lead the Capital City Authority. He has done so with the appointment of Bambang Susantono, a former Transport Minister with a PhD in Infrastructure Planning from Berkeley, who will provide a steady and firm hand for the building and shifting of the new capital.

Jokowi will also be looking over the next two years to ensure that the funding for his capital project cannot be vetoed by his successor. A long-term loan to fund the construction of the remaining parts of the core government region — that will only be partially complete by 2024 — looks like a distinct possibility.

Currently, only the presidential palace and the key ministries of defence, home affairs and foreign affairs will be part of the first wave of government officials moving to Nusantara. Additional state funding will be needed post-2024 for the construction of the parliament complex, supreme and constitutional courts, the remaining government ministries and supporting infrastructure.

Jokowi needs more time and funding. Plans for the new capital development may not fully materialise by the end of his term in 2024, as implementation delays plus the hike in global oil prices further balloon state subsidies for fuel.

The possibility of delaying presidential elections for one to two years was mooted recently by the chairmen of three political parties supporting the government coalition. Jokowi’s less than forceful rebuttal of that narrative indicates his unease about leaving the continuity of his pet project to his successor.

In the uncertain post-2024 landscape, the success of the state capital project depends on Jokowi’s ability to insulate it from vagaries in the configuration of political power, the preferences of Indonesia’s political leadership and the executive-legislative relationship.