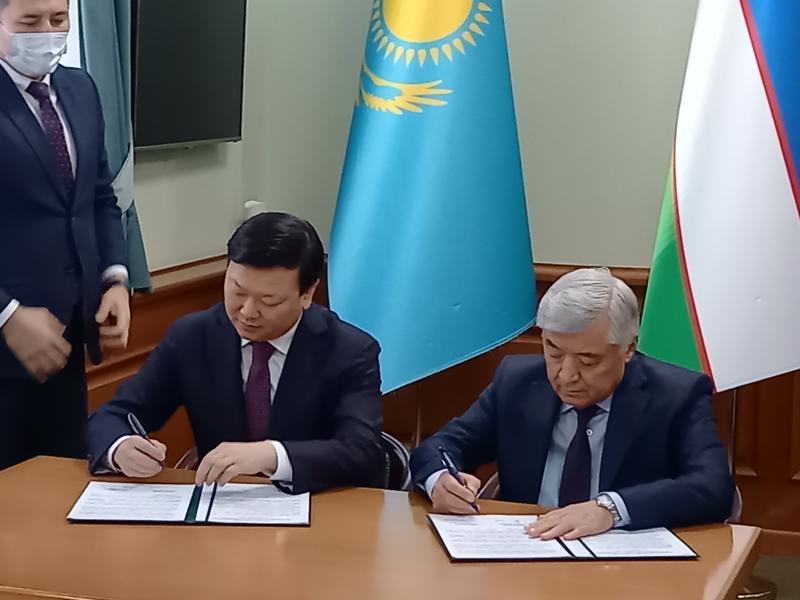 Kazakhstan and Uzbekistan are not just neighbours, but two strategic partners and the largest trade partners in Central Asia. Uzbekistan’s importance in Kazakhstan’s foreign trade is evident in all major areas of cooperation – trade in goods, trade in services, investments and joint ventures.

More than 1,400 enterprises with the participation of Uzbek capital are now operating in Kazakhstan and more than 400 joint Kazakh-Uzbek companies. To date, industrial cooperation between the countries exceeds 38 projects worth US$2.2 billion, creating about 11,000 jobs.

The key message voiced repeatedly by the two leaders, who met on several occasions this year, including for Central Asian leaders’ consultative meeting, and Commonwealth of Independent States (CIS) leaders’ meeting, was that there is still a room for growth across all areas.

Meeting Mirziyoyev, Tokayev thanked him for the hospitality and noted the importance of state visit to Uzbekistan. He highlighted the fraternal relations between the two countries stemming from “unbreakable friendship and mutual respect.”

“We are bound by the commonality of cultures, traditions, languages and religion. Our countries with a common history and destiny have common goals and prospects for development. That’s why I attach particular importance to today’s visit. I am confident that we will raise our relations to a qualitatively new level. The stronger and more successful the cooperation between our countries, the more stable the situation in Central Asia will be,”said the President.

The two leaders discussed key issues of the Kazakh-Uzbek strategic partnership, paying particular attention to the expansion of cooperation in the political, trade and economic, cultural and humanitarian spheres.

Mirziyoyev said he is also sure the current visit will give a new impetus to the development of relations between the two countries, and the signed documents will become a solid basis for the implementation of set tasks.

On December 21, Tashkent also hosted the fourth Interregional Kazakh-Uzbek Business Forum resulting in the signing of 40 documents worth about $2.5 billion on investment, trade and economic cooperation.

Kazakh and Uzbek companies plan to launch projects for the supply of machine sets and components for Chevrolet cars, production of ceramic tiles and infusion solutions, as well as to establish production of yarn, gypsum, and polypropylene bags, among other projects.

Speaking at the plenary session, Kazakh Vice Minister of Industry and Infrastructure Development Marat Karabayev told about the opportunities for business development in Kazakhstan.

“In recent years the world prices for metals have increased significantly. In turn, we have analyzed the current state of the metallurgical industry and identified the most promising solutions for development of the industry. This analysis allowed us to work out the issue of providing raw materials to Kazakhstan’s enterprises of the manufacturing industry at a competitive price below the London Metal Exchange,” said Karabayev.

He also spoke about the opportunities that Kazakhstan provides in the construction industry, light industry as well as oil and gas engineering.

According to Uzbek Minister of Investments and Foreign Trade Jamshid Khodjaev, cooperation in high-tech industries is of particular importance.

“Of particular importance is the joining of efforts to create high-tech industries based on our comparative advantages, the development of industrial cooperation for the production of products with high added value to further the joint development of international markets,”said Khojaev in speech at the forum.

“We have a huge potential to multiply joint mutually beneficial projects. For this we already have everything necessary – production, technological, human and natural resources. I am confident that with the coordinated, diligent joint work we can bring the Uzbek-Kazakh partnership to a qualitatively new level,” he added.

The two leaders signed several documents and agreements, including the treaty on allied relations and agreement on state border demarcation.

Memorandums were signed on strategic reforms, development of electronic commerce, forestry, civil service, as well as agreements on implementing projects in the energy, chemical industry, transport and logistics sectors.

During the talks, the two leaders also agreed to establish the Supreme Interstate Council and the Interparliamentary Council, which will further strengthen the political platform for bilateral cooperation.

According to Tokayev, the signing of the treaty of allied relations will “confirm the exemplary nature of interstate relations.”

“If we call the treaty a document of historical significance, I think it would not be an exaggeration. This groundbreaking document opens up new horizons for us and fully reflects the mutual desire of the two countries for further rapprochement. In addition, the treaty on the demarcation of the Kazakh-Uzbek state border will be signed today. This historic agreement completes the international legal establishment of Kazakhstan’s state border on its southern borders,” said Tokayev.

Mirziyoyev also emphasized the significance of the documents signed during the visit.

“I particularly note the treaty of alliance, which meets the genuine interests of both fraternal nations and marks a new stage in the history of Uzbek-Kazakh relations. Unionism is the highest and most trustworthy level of interstate partnership. Thus, we have confirmed that we intend to build a common future,” said Mirziyoyev.

As the year is coming to an end, so does Tokayev’s packed diplomatic schedule with high-level visits to Kazakhstan and his official visits to other countries, once again reaffirming the country’s constructive multi-vector foreign policy.