Over 60,000 cross from Asia to Europe in Istanbul Marathon 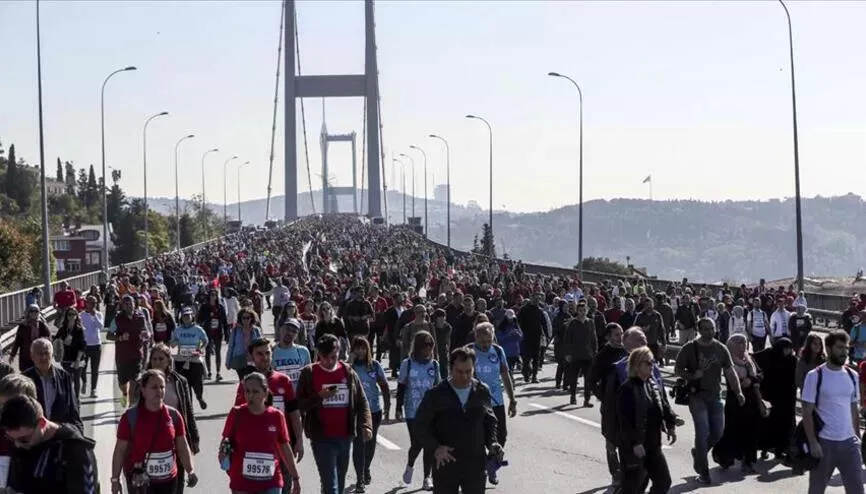 Over 60,000 participants ran from the Asian to the European side in the 44th Istanbul Marathon.

Kenyan athlete Robert Kipkemboi won the men’s title, breaking the course record with a time of 2:09:37. Ethiopia’s Sechale Dalasa came first in the women’s by breaking a career record.

Starting in the Altunizade district on the Asian side, the 8-kilometer stage of the race was completed in Dolmabahçe on the European side.

The 15-kilometer stage finished in the Yenikapı neighborhood in the Fatih district, while the 42-kilometer marathon ended in historic Sultanahmet Square in Fatih.

In the race, which is the only intercontinental marathon in the world, around 30,000 athletes took to the track in the 15-kilometer and 42-kilometer stages, while over 60,000 people participated in the 8-kilometer public run.

Over 200 skaters, including Sebastian Mirsch, a German athlete from Germany Skating National Team, ran in the marathon.

The Istanbul Marathon is organized by the Istanbul Metropolitan Municipality and Spor İstanbul and sponsored by N Kolay Payment Institution, a subsidiary of Aktif Investment Bank.

Taş said that though many large-scale marathons were canceled during the pandemic, the Istanbul Marathon, Türkiye’s largest mass sports organization, which was held for the 44th time, was not canceled and that Türkiye became a model to the world in this sense.