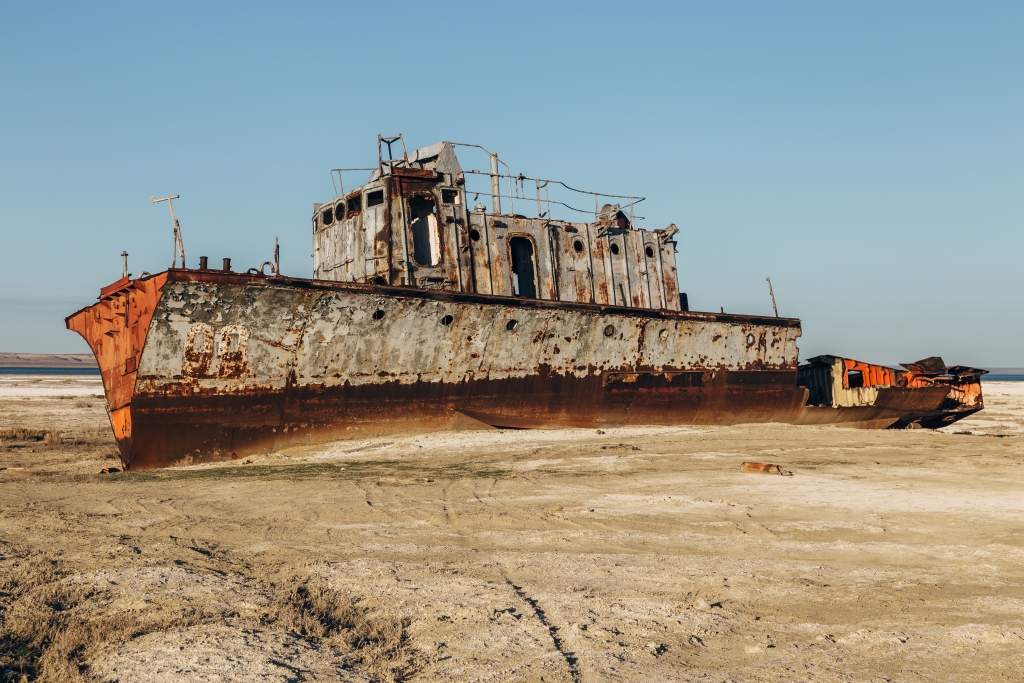 Winds kick up large amounts of dust from the desert that has formed as the world’s fourth largest lake has disappeared, spreading it around the region and raising concerns about public health.

In 1959, officials in the Soviet Union decided to divert river flows feeding the Aral Sea to the deserts of Central Asia, where the water irrigated farms supplying a growing cotton industry. As the cotton blossomed, the lake’s level dropped. Today, only slivers remain of what was once the world’s fourth largest lake.

As the Aral Sea has become a desert, known as the Aralkum, soil from the dry lake bed has added to the dust that swirls above Central Asia. This dust carries hazards beyond those typically associated with natural particulate matter: It’s mixed with salt as well as residues from agricultural pesticides and fertilizers introduced into the sea. How much and where dust from the former Aral Sea spreads across the surrounding region are therefore important public health questions.

In a new study, Banks et al. used an atmospheric transport model known as COSMO-MUSCAT (Consortium for Small-scale Modelling-Multiscale Chemistry Aerosol Transport) to quantify how much dust the dry lake bed contributes to the region, where the dust is most prevalent, and how much of the dust can be measured by satellites. The modeling revealed that the dry lake bed of the former Aral Sea added about 7% more dust over Central Asia in the 2000s to 2010s compared with the 1980s and 1990s. Dust emissions from the Aralkum appear to peak twice per year, in spring and early winter. When the researchers focused on a 1-year period from spring 2015 to spring 2016, they found that among the region’s major cities, Tashkent, Uzbekistan, and Ashgabat, Turkmenistan, were hit hardest by this dust, with dust levels exceeding World Health Organization recommendations for 2–3 days per year. However, substantial year-to-year variability in winds means that different areas likely bear the brunt of the dust in different years.

The researchers also found that dustiness in the region often coincides with cloudiness. They estimate that more than two thirds of dust storms are obscured by clouds, a condition most pronounced in winter and spring, meaning satellites may struggle to quantify dust emissions from the dry lake bed. In light of this observation, the authors suggest that complementing modeling studies with ground-based observations will be particularly important for continuing to reveal how dust from the former Aral Sea is affecting Central Asia. (Journal of Geophysical Research: Atmospheres, https://doi.org/10.1029/2022JD036618, 2022)