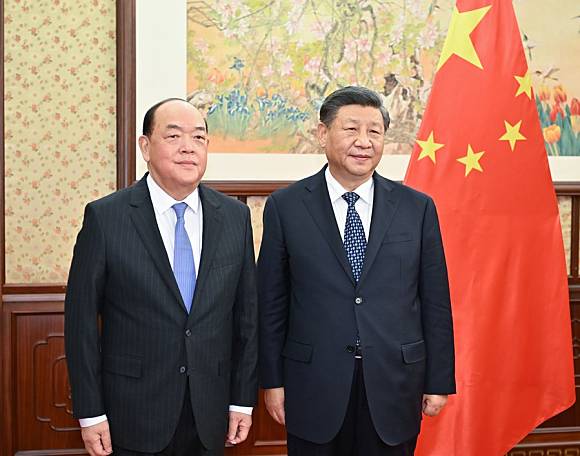 President Xi Jinping on Friday met with Ho Iat Seng, chief executive of the Macao Special Administrative Region (SAR), who is on a duty visit to Beijing.

During the meeting, President Xi heard a report from Ho on Macao’s current situation and the Macao SAR government’s work.

Xi said Ho has led the SAR government over the past year to carry out steady administration and hard work, which has maintained the stability of the overall social situation.

Ho has also led the Macao SAR government in steadily advancing the amendment of the law on safeguarding national security in Macao, appropriately handling the revision to local gaming laws and a new round of gaming concession tendering, and making solid progress in the building of the Guangdong-Macao in-depth cooperation zone in Hengqin, Xi added.

The central authorities fully acknowledge the work of Ho and the Macao SAR government, Xi said.

The central authorities will firmly implement the principle of “One Country, Two Systems” and fully support Macao in giving its full play to its own advantages and characteristics, striving to break new ground in the practice of “One Country, Two Systems” with Macao characteristics, and making greater contributions to building a modern socialist country on all fronts, Xi said.