US air defense system delivery hopes to save Kiev 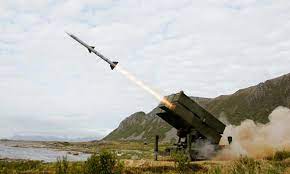 Kiev (12/07 – 44.44) The Biden administration has announced that Ukraine will receive the National/Norwegian Advanced Surface to Air Missile System (NASAMS) to shore up Ukraine’s air defenses, which are being systematically destroyed by Russia.

The NASAMS is the same system that protects the air space around the White House in the United States.

There is no word yet from Ukraine where NASAMS will be deployed once it arrives.  NASAMS might be deployed to protect the Mariinski Palace, the official residence of Ukraine’s president, or the “secret” area where Ukrainian President Volodymyr Zelensky is holed up in a bunker.

The main concern is that Russia might attack Ukraine’s capital and renew its effort to topple the Ukrainian government. Supplying the NASAMS system to Ukraine indicates Washington’s assessment that it cannot defend against cruise missiles and Kiev may be in danger.

The most important threat is Russia’s 3M54 Kalibr cruise missile, which can be launched from ships, submarines and aircraft. Russia also has a gaggle of different multiple launch rocket systems (Grad, Uragan, Smerch, Tornado) and tactical ballistic missiles (Iskander, Tochka and Tochka-U) as well as self-propelled and towed artillery.

NASAMS has been tested against simulated cruise missiles but it has never been used in battle. It isn’t clear how soon Ukraine will actually get NASAMS but Washington has promised two units. The system is made by Raytheon in the United States and by Kongsberg in Norway. It is unclear if the system can be supported without contractor help.

Similarly, man-portable (MANPADS) ground-to-air missiles including Stinger FIM-92 can be mounted on vehicles and fired from launchers. The Russians have done the same thing with their Dzhigit, a support launch system for the Russian IGLA-S MANPADS.

NASAMS has now added an extended range version which is a mash-up of an AIM-120 seeker head and the rocket and guidance package of the US Navy’s Evolved Sea Sparrow (RIM-162), originally based on the Sparrow air-to-air missile. It is not known if Washington will supply the ER version to Ukraine.

Missile threats often approach their targets well after their engines have burned out and there is little or no heat signature, making radar sensing all-important, whereas cruise missiles stay powered all the way to the target. In the case of some versions of the Russian Kalibr cruise missile, there also is an auxiliary rocket that speeds up the missile during the terminal phase of its trajectory.

US and NATO take a risk

Because Ukraine is an active war zone involving Russian forces, Washington is taking a security risk by providing NASAMS to Ukraine. Parts or all of NASMS could be captured by Russian forces.

NASAMS are used by NATO countries including Norway, Lithuania, Netherlands, Spain and Hungary. Future NATO member Finland also uses NASAMS. Any compromise of the NASAMS in Ukraine will weaken core NATO air defenses in the future.

Beyond the NATO threat, sensitive and classified information about the NASAMS seeker head and radar could be used to harden Russian weapons against NASAMS or for targeting sensitive installations or for undermining Washington’s air defenses.

On September 11, 2001, the US Capitol was targeted by al-Qaeda terrorists commandeering hijacked commercial aircraft. The Pentagon, now protected by the NASAMS system but not in 2001, was seriously damaged when American Airlines Flight 77, a Boeing 757, crashed into the western side of the building, near its helipad.

Saudi Arabia’s oil infrastructure at Kurais and Abquaiq was hit by Iranian drones and cruise missiles on September 14, 2019. The Iranian cruise missile was a Soumar type, based on the Russian KH-55 cruise missile.

These locations were protected by French and Swiss short-range air defenses (Crotale and Oerlikon) and longer-range US Patriot air defense installations. None of them reacted or responded in any significant way to the Iranian attack, even though Iran launched at least 25 cruise missiles and drones against Abquaiq and Kurais.

NASAMS is a fairly sophisticated air defense system that has only been tested on a mock cruise missile and has not seen active combat.

Early missile radars built into the nose of the missile stayed on after launch until impact.  This made it easy to detect the missiles and to apply countermeasures and jamming.

The NASAMS onboard radar, however, is activated late in the flight envelope; the NASAMS missile flight path is updated by telemetry without the onboard radar operating until it closes in on its target, so its radar does not give away its location too soon.

The NASAM interceptor has a range of 30 to 50 kilometers (18.6 to 31 miles), although in practice the range is probably less. How well the NASAMS will do against Russia’s Kalibr cruise missiles isn’t known.

Kalibr is said to be capable of evading active air defenses and electronic countermeasures. In addition, the Russians are good at jamming and will likely go after the NASAMS telemetry radio link.

While hard data is lacking, the fact that US Defense Secretary Lloyd Austin made a deal with Slovakia to provide one S-300 system to Ukraine indicates that Ukraine’s air defenses need reinforcement. Germany also said in June that it would deliver its IRIS-T short-range air defense system to Ukraine.

Meanwhile, Russia has consolidated its position in Luhansk and is now preparing a new offensive in Donetsk. Defense expert Jouni Laari has summed it up this way:

“Russia has concentrated a total of 60 battalion tactical groups (BTGs) in the Izium-Lyman-Bilohorivka-Bakhmut area” –20 BTGs each in the directions of Izium, Lyman and Belohorska-Bakhmut. “The Ukrainians defending the corresponding area have altogether 20 battalions.”

While Russian President Vladimir Putin has announced a tactical pause, it is likely the Russians will continue to try to grind down and even trap Ukraine’s remaining forces.

Russia has also announced that it has knocked out two HIMARS rocket systems in a depot at Kramatorsk and destroyed the radars of an S-300 in the Limany area in the Mykolaiv region. Ukraine has denied these reports.

The main, unspoken fear in Washington and London is that Russia’s real objective is regime change. At the start of the Ukraine war, Russia tried to use special operators to decapitate Ukraine’s leadership in Kiev. Failing in this and tactically outmaneuvered around Ukraine’s capital, Russian forces pulled back.

But there is now a renewed danger of a Russian military breakthrough and attacks on Kiev that could include air attacks and the use of tactical and cruise missiles.

Putin is warning that Russia is “just getting started” in Ukraine. That helps explain why the NASAMS could play an important defensive role in protecting Ukraine’s government, provided they get there in time.

But it needs to be kept in mind that Russia has many different offensive systems it can use against Kiev, if it decides to do so. Moreover, it is uncertain how effective the deployment of NASAMS will be in Ukraine or whether it can save the Ukrainian government.