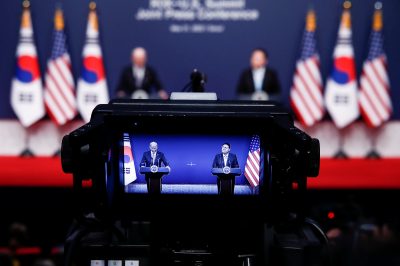 Seoul (13/07 – 57.14) Strategic competition between the United States and China has dramatically revealed the vulnerabilities of the ideological and institutional foundations of globalisation. The Biden administration is actively promoting the ‘reshoring’ of production to contain China and alleviate supply chain vulnerabilities. It is also fostering high-tech cooperation with allies and partners — a policy from which South Korea has emerged as a key player.

The cornerstone of expanded ROK–US cooperation was laid out at the summit between US President Joe Biden and former South Korean president Moon Jae-in in May 2021. Here the two leaders confirmed they would cooperate in their response to global challenges including COVID-19, the global economic recovery and climate change. At the ROK–US business roundtable, plans for cooperation in semiconductors, batteries, electric vehicles, vaccines and the space sector were announced.

Deciding whether to join the Quadrilateral Security Dialogue (Quad) revealed South Korea’s dilemma over elevating bilateral cooperation with the United States to regional cooperation. The Moon government pursued strategic ambiguity to separate its national security from the economy. Rather than formally joining the Quad, the Moon government committed to cooperation in areas to which it could substantially contribute. Seoul’s strategic posture jointly considered South Korea’s major economic dependence on China and the ROK–US alliance as a key pillar of security.

The need for South Korea to take advantage of the economic rise of China as its largest trading partner — especially with increasing uncertainty in the global economy — gave rise to the powerful mantra ‘security with the United States, economy with China’. This was the idea that South Korea could maximise its national interests by expanding economic relations with China, while also solidifying its traditional security alliance with the United States.

South Korean President Yoon Suk-yeol has pursued an integration of economics and security since his inauguration on 10 May 2022 — shifting away from Moon’s strategic ambiguity. His new foreign policy stance focusses on the uncertainty caused by emerging security threats, strengthening regional diplomacy to alleviate dependence on China and pursuing high-tech competitiveness through better global economic governance. The Yoon government is seeking to upgrade the ROK–US alliance into a comprehensive strategic alliance.

The changes to ROK–US relations were on display at the May 2022 ROK–US summit. Biden’s visit to South Korea was held just 11 days after Yoon took power in the new presidential office — symbolising a new chapter in ROK–US relations. South Korea’s stance on the Quad changed when, in April 2022, then president-elect Yoon made it clear that, while continuing to pledge South Korea’s participation in the working group, the new government would positively review joining the Quad if invited.

When the Yoon government announced it would jointly launch Washington’s Indo-Pacific Economic Framework (IPEF), concerns grew that South Korea’s decision to join the IPEF as an inaugural member would further hamper peace and prosperity on the Korean peninsula. Critics claimed it ignored the harsh reality of Seoul’s economic dependence on China, but the decision shifted South Korea’s foreign policy from strategic ambiguity to strategic clarity.

At the core of the decision was a push to manage the risk of China’s economic coercion. South Korea replaced ‘security with the United States, economy with China’ with ‘security with the United States, economy with the world’. The IPEF is a new opportunity and a challenge that requires South Korea to pursue a sophisticated economic statecraft that combines diverse policies addressing various areas of interest.

South Korea has reaffirmed itself as an indispensable ally of the United States seeking to establish a regional rules-based order to govern emerging issues including the digital economy, climate change, decarbonisation and anti-corruption. Given that US–China strategic competition is escalating, South Korea should lead the establishment of an inclusive regional and global order such that the Indo-Pacific does not fall into a vortex of self-interested competition.

The IPEF will likely face difficulties in setting high standards for emerging issues, but South Korea is in a good position to mediate between regional countries with different interests and capacities. It should pursue middle power diplomacy that provides developing countries with the capacity to meet emerging standards in the digital economy, climate change and COVID-19.

South Korea needs to pursue strategic flexibility. While strategic clarity has advantages in terms of predictability, transparency and consistency in foreign policy, an overt focus on strategic clarity may prove to be a diplomatic burden in an era of hyper-uncertainty.

The new government should seek strategic flexibility by combining various policies to go beyond the historical dichotomy between strategic ambiguity and strategic clarity in South Korean foreign policy.